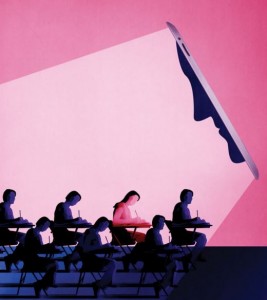 …School boards are similarly seeking out Charity Republic, based in Kitchener, Ont. The company makes an online tool for digitally tracking work placements, internships and volunteer hours. The idea revolves around replacing paper-based tracking methods, which can easily be lost. Like Sesame, Charity Republic creates data that can shared between teachers, students and parents.

‏Dimoulas-Graham had previously worked as an online course facilitator in epidemiology for the Public Health Agency of Canada before starting Charity Republic in 2010 with an eye to helping charities manage their volunteers. The business only started growing three years ago, after she realized the software could plug an existing hole in the education system.

‏Thirty-five school boards and universities in Ontario are now using Charity Republic’s software, with more coming soon in Alberta and British Columbia, she says. The company, which still deals with charities as well, is up to five full-time and two part-time employees.

To read the rest of this article, which was originally published in Canadian Business, please click here.